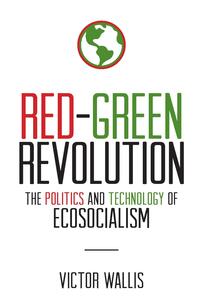 "Victor Wallis ... can be considered as one of the leading political thinkers of the ecosocialist movement in the English-speaking world ..." by Christian Stache (International Critical Thought)
LINK TO THE REVIEW

'Victor Wallis’s new book is an important contribution to the growing ecosocialist movement, a passionate call to organize and act against capitalist ecocide'. by Ian Angus  (climateandcapitalism.com)
LINK TO THE REVIEW

"Victor Wallis agrees with the ecosocialists such as John Bellamy Foster and Paul Burkett who emphasize the ecological dimension of Marx. But he also acknowledges that there are illusions in the “technological neutrality” of the capitalist productive forces in some of his writings. In any case, the object of his outstanding book is not Marx as such, but the Marxist perspective of a Red-Green Revolution."  by Michael Löwy (New Politics)
LINK TO THE REVIEW


"The scale of environmental crisis is absolutely terrifying. So I was very pleased to read Victor Wallis’ new book Red-Green Revolution which aims to both explain capitalism and environmental destruction and offer a clear strategy for building a movement to challenge both. Wallis takes up this point early on...."  by Martin Empson (ResoluteReader.blogspot.com)
​ LINK TO THE REVIEW

"... in the face of urgent crises that call for immediate action now, the kind of deep and serious thinking that Wallis models remains an absolute necessity if we are to truly bring forth a new world from the ashes of the old." by Joseph G. Ramsey (San Francisco Bay View)
LINK TO THE REVIEW

"... Red-Green Revolution makes many great points about the way that an ecological movement can, and must, be part of any larger political vision. The way forward will require self-sufficient communities, a deep commitment to democracy, and a clarion call capable of uniting a humanity that is divided in many ways. Red-Green Revolution articulates a vision of that way forward. While that vision may have blind spots in how to build a mass movement, an ecosocialist movement that grapples with the full problems of our intensely hierarchical and unsustainable society is an absolute necessity, and Red-Green Revolution offers a valuable perspective towards making ecological consciousness a key element of the left today."
by Zachary Eldredge (Science for the People)
LINK TO THE REVIEW
​
Interviews 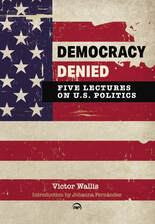 DEMOCRACY DENIED
Five Lectures on U.S. Politics
​By Victor Wallis.
Trenton, London, Cape Town, Nairobi, Addis Ababa, Asmara, Ibadan, New Delhi: Africa World Press, 2019
Buy Democracy Denied
Reviews
“Whether I’m standing in front of a roomful of college students studying political economy or organizing a book discussion group in a maximum security men’s prison, Victor Wallis’ Democracy Denied is my go-to book of choice for exploring race, class, and power in America. Anyone who wants to better understand how the U.S. wound up where we are right now and where to go from here should read this small, easily understood, and even fascinating volume as soon as possible.”
~ Rebecca Hensley, Sociologist and Prison Abolition Activist.

​In [Democracy Denied], Victor Wallis develops a masterful, critical overview of United States history with a focus on democratic politics, or the lack of such politics. He argues persuasively that the widely heralded American "model" of democratic ideals has had little correspondence to reality.
~ Carl Boggs, National University, in New Political Science.

"Subsequent to reading this book, I shared it with six other prisoners, two of whom I’ve known for nearly 10 years and who were completely apolitical, having never once showed an iota of interest in anything related to politics. Yet, they found this book to be reader friendly and well articulated. That’s a testament to the excellent writing that both highly political and apolitical minds alike can easily comprehend." by a Virginia prisoner (San Francisco Bay View)
LINK TO THE REVIEW

"Against the grain of a patriotic 'democratic socialism' that seeks the path of least resistance, Wallis makes a strong case that challenging US imperialism is crucial to the future of the Left, not only because of the destruction militarism and war wreak on people and the planet but because of the co-optive effect of imperialist and nationalist ideology among (especially white and male) sectors of the U.S, working class." by Joseph G. Ramsey (San Francisco Bay View)
LINK TO THE REVIEW 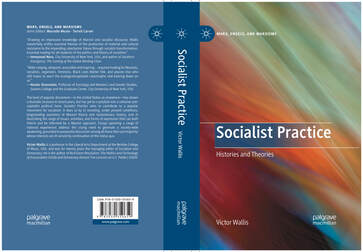 ​Socialist Practice: Histories and Theories is critical reading for all who care about the future sustainability of humanity. At a time of planetary dystopia, Victor Wallis offers a sweeping intellectual contribution to understanding the global economic, political, and ecological fissures threatening humanity. Drawing on impressive knowledge of Marxist and socialist discourse, Wallis masterfully unifies essential themes of the production of material and cultural resistance to the impending cataclysmic future through socialist transformation. Essential reading for all students of the politics and history of socialism.
– Immanuel Ness, City University of New York, author of Southern Insurgency: The Coming of the Global Working Class


Wide-ranging, eloquent, accessible and inspiring, Victor Wallis’s collected essays in this volume embody an optimism about future political action, along with a fierce realism about the challenges we face as a planet. This is required reading for Marxists, socialists, organizers, feminists, Black Lives Matter folk, and anyone else who still hopes to avert the ecological/capitalist catastrophe now bearing down on us.
-- Hester Eisenstein, Professor of Sociology and Women’s and Gender Studies, Queens College and the Graduate Center, City University of New York


Victor Wallis, an exemplary activist-scholar whose solidarity work with prisoners has lasted for decades, brings to light the political orientation that guides his efforts. He notes that “the oppressed knows the oppressor better than vice versa” and that oppression cuts all of us off from our full humanity. His book seeks to illuminate ways to restore balance to the earth and to all our lives. His history of liberation movements’ theory and practice is instructive. I hope his call for “action on a massive scale” resonates widely.
-- George Katsiaficas, author of The Global Imagination of 1968 and Asia’s Unknown Uprisings


Today socialism is experiencing a remarkable revival under the mantles of democratic socialism and ecosocialism. But what do these new conceptions of socialism mean, what issues are being raised, and how are they related to the fundamental struggles of our time encompassing numerous forms of oppression and threats to human survival? In search for concrete answers, one could hardly do better than to read Victor Wallis’s concise and comprehensive book on Socialist Practice.
-- John Bellamy Foster, editor, Monthly Review


Victor Wallis presents us not with the answers but with a framework through which we can look at the successes and failures of the global socialist movements and conceptualize a way forward. This book rejects despair and cynicism with an emphasis on facing reality. But this is also a book designed to provoke debate rather than shutting down principled exchanges. Agreement is not the requisite for reading this book. Rather, a desire for deep and substantive engagement toward the reconstruction of emancipatory politics.
-- Bill Fletcher, Jr., executive editor, globalafricanworker.com; former president of TransAfrica Forum
​
Reviews:
by Steve Ellner in Monthly Review